Mónica Pérez, Paintings and Frames Conservator at the Centro Nacional de Conservación y Restauración in Santiago, Chile, introduced us to the painting Our Lady of Mercy with St. Peter Nolasco and St. Raymond Nonnatus, the painter José Gil de Castro, the independence movements of Chile and Argentina, and hanging scroll paintings. There is a lot of history, iconography, and treatment to unpack here. I was initially interested in blogging this presentation as I have a special interest in Spanish Colonial Art, and am currently research Our Lady of Mercy and the development of the devotion during the colonial period in South America. My interest was further peaked by the fact that it was a hanging scroll painting as many of these rarely survive in their original format.

José Gil de Castro was a Peruvian portrait painter who worked in Chile and Argentina in the first half of the 19th century. Gil de Castro started by signing his name in Latin and writing the date in numbers to show he was a cultured man. He progressed to writing out the date in letters, and later switched to writing in Spanish. Gil de Castro was involved in the liberation movement of Chile in the 19th century so his move towards writing and signing in Spanish could be seen as him adopting a more patriotic stance. He transitioned from painting Spanish leaders and royalty to painting military leaders, local aristocracy, and patriots, and is considered the father of Chilean national painting. Starting in 2008 a team of Latin American scholars conducted a six-year study on José Gil de Castro that resulted in the Getty supported publication Más allá de la imagen (Beyond the Image) as well as the colloquium Gil de Castro contemporáneo. El pintor en su tiempo y en el nuestro. I was not able to access the publication Beyond the Image online, but I did find a blogpost related to it in The Iris, the Getty’s blog. Unfortunately the existence of Our Lady of Mercy with St. Peter Nolasco and St. Raymond Nonnatus was unknown at the time and the painting was not included in the publications.

Our Lady of Mercy with St. Peter Nolasco and St. Raymond Nonnatus (1817) is in the collection of the Museo O’Higginiano y de Bellas Artes de Talca, Talca, Chile. The painting, measuring 74.8cm x 53.3cm, is a typical depiction of the Virgin Mary as the crowned Virgin of Mercy wearing the white habit typical of the Mercedarian order and with arms wide open. In one hand she holds the Mercedarian scapular and in the other a yoke, symbol of the order’s original dedication to the ransoming of Christians taken captive by the Moors. In the lower part of the painting are St. Peter Nolasco on the left and St. Raymund Nonnatus on the right. At the very bottom of the painting is a banner with an inscription that indicates it was commissioned by María del Carmen Ruiz Tagle from Santiago, Chile, in 1817 and signed “Fecit me Josephus Gil”. In terms of the iconography, Mónica Pérez talked about how devotion to Our Lady of Mercy was transferred to Our Lady of Mount Carmel, who became the patron of the liberation and was adopted as the patroness of Chile in the 19th century. This information, couple with what we learned about the evolution of the artist’s signature, could be used to place the work within the context of Gil de Castro’s shift from vice regal to patriotic painter.

Interest in the painting and its subsequent 2015 treatment at the National Center for Conservation and Restoration was motivated by its inclusion in the then upcoming exhibition José Gil de Castro, Artist of Liberators at the National Fine Arts Museum in Santiago, Chile. The painting as well as its frame were in need of repairs. The painted canvas was nailed to a plank of wood. Although it is common for Spanish Colonial paintings to be nailed or glued to the front of a strainer, paintings nailed to a full board are not. There were horizontal distortions and tears, particularly towards the bottom of the canvas. There were losses to the paint layer and overpaint over the text at the bottom of the composition which made it hard to read, all topped by a yellowed varnish. These are all common condition issues found in paintings and as such, they proceeded with a treatment proposal typical for an easel painting which included removal of the discolored varnish, removal of planar deformations, lining, and compensation for loss. If you read the title of the presentation then you know they were in for a big surprise!

Upon unframing the painting, they came across signs that this was not a typical easel painting. There was a silk ribbon hand stitched around the perimeter of the canvas which combined with the horizontal cracks and distortions, suggested this was a hanging scroll painting. The scroll format and a note containing a prayer suggested the painting was used for private devotion. The painting would have initially be composed of the extant canvas with a rod and case attached at either end, all together making a single unit. Study of other paintings by Gil de Castro shed further light into his use of the scroll format. Displayed on the wall behind two other sitters that the artist painted were hanging scroll painting of Our Lady of Mercy. Paintings within paintings! In addition to this, IRR analysis revealed that the artist modified the date at the bottom of the painting. It was initially painted in 1814, that same year Gil de Castro made two other versions with similar iconography of Our Lady of Mercy. Pérez did not venture to guess why the change of date. 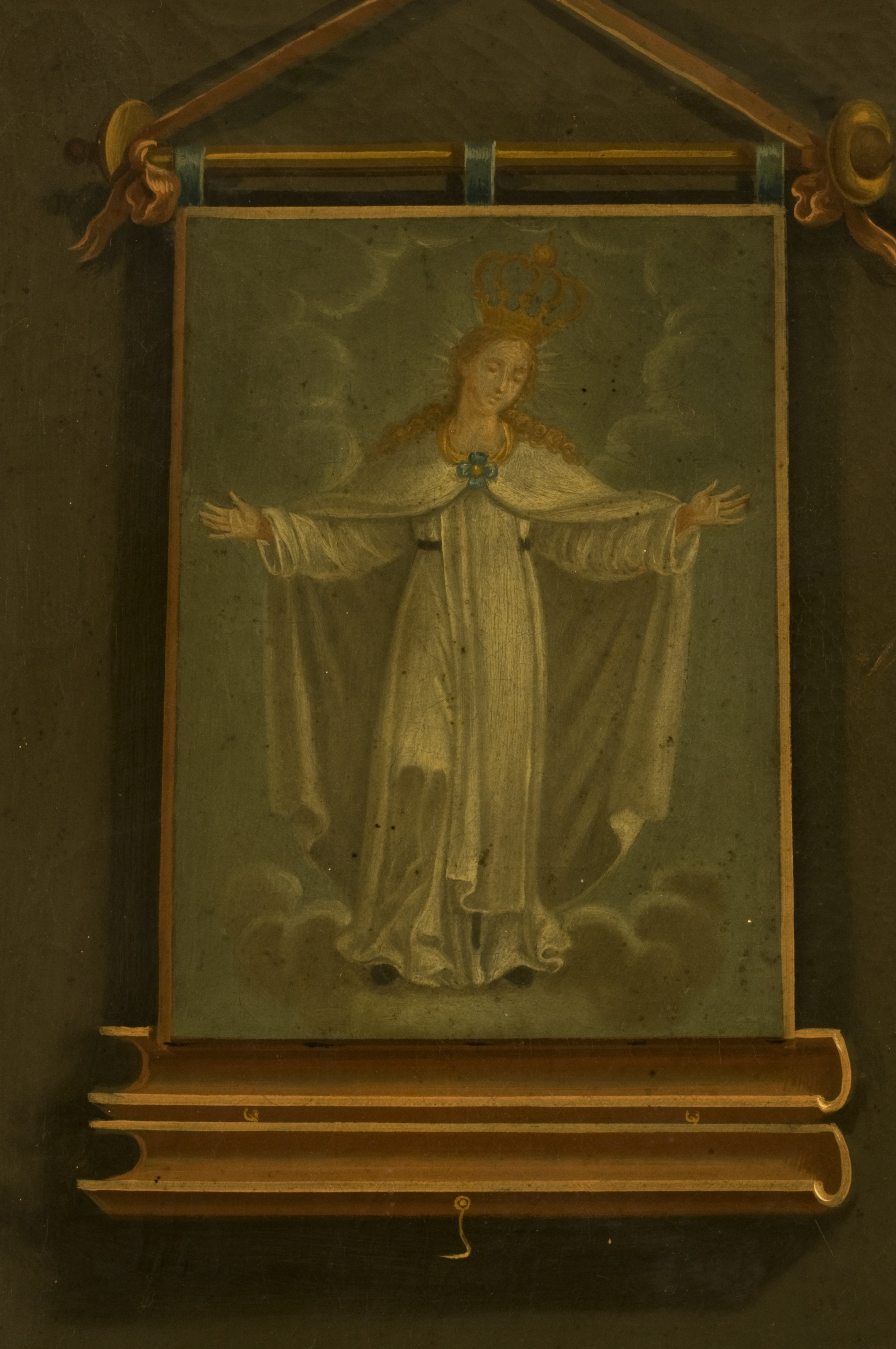 In light of this new discovery, the team of conservators in conjunction with a team of curators, art historians, and the painting’s owners decided to re-evaluate the initially proposed treatment. They wanted to preserve the evidence of the original format and history of use of the painting which meant limiting themselves to addressing issues that affected the interpretation of the image. Although cracks affected the visual appreciation of the painting, they attested to its intended use. They removed the painting from the board, removed the yellowed varnish, relaxed the planar deformations, carried out tear mending with the application of welded stitches, did some visual reintegration, revarnishing, and placed a Crepeline ribbon over the edges to protect the original ribbon. The painting was then mounted like a hanging textile. The treatment provided a new interpretation and context for the painting, and added to the understanding of Gil de Castro’s materials and techniques.

You can read more about the treatment of this painting at the Centro Nacional de Conservación y Restauración’s website, including images of the painting’s original condition and examination. The National Fine Arts Museum’s website also has some online resources related to the exhibition José Gil de Castro, Artist of Liberators as well as the catalogue in pdf form . Most of the resources are in Spanish so time to brush up on it!