Excerpt from an article in The Wall Street Journal that demonstrates just one example of the importance of things and why conservators are so passionate about their life’s work.

The March 11 tsunami that devastated Rikuzentakata, a small seaside city in northern Japan, wiped away thousands of homes and left 2,000 residents dead or missing. As it swept away a community, the tsunami surge also carried off its memories, stockpiled on photographic paper and catalogued in albums.

As search crews recovered bodies in the weeks following the disaster, they also collected what waterlogged family albums and muddy pictures they found scattered within the rubble. Volunteer groups have since embarked on the tedious tasks of drying, cleaning and organizing hundreds of thousands of photos.

“When they thought they had lost everything and something like an old picture reappears, we think it will give them strength to move forward,” said Tatsuya Hagiwara, a volunteer with the National Research Institute for Earth Science and Disaster Prevention.

In a scene resembling a flea market, organizers spread out albums, yearbooks, diplomas and other keepsakes across a parking lot on the edge of town. A crowd quickly gathered, many seeking pictures of family members and friends who numbered among the dead and missing.

A yelp rose from the crowd. “That’s me!” shouted Etsuko Kanno, showing a picture of a young woman in a wedding dress. The bride, laughing, covered her mouth with a white-gloved hand.

Ms. Kanno – now a 51-year-old grandmother, who arrived at the parking lot with her one-year-old granddaughter asleep on her back – said the picture was taken 26 years ago at a photo shop in neighboring Ofunato. The photographer, she recalled, snapped the picture without warning her.

“This was the happiest moment,” she said, gripping the picture. “But this is only a picture of me. I wanted a picture of my husband.”

The man she married a few days after that picture was taken died in the tsunami. The powerful waters swallowed their home, where he was spending a day off from work with his 83-year-old mother, who also died.

Pictures of her three daughters, grandchildren and husband were washed away with the rest of their possessions.

“I want something on paper that I can look at,” she said. “I looked around and found nothing.”

When volunteers began tackling the photo cleanup several weeks ago, they started with a wet clump of snapshots. They laid the pictures out to dry. They dusted dirt from individual photos with paint brushes, and wiped plastic album sheets clean with damp rags.

The process was time-consuming and imperfect. Only about 10% of the recovered photos, some still damp and covered in dirt, were displayed last week.

People who found photos belonging to them filled out a form and took the pictures. Organizers said they may take the rest of the photos by truck to the 65 different evacuation centers across the city.

For group photos, the National Research Institute for Earth Science and Disaster Prevention, one of the organizations leading the volunteering, plans to scan the pictures digitally and upload the images to the Internet. The group is working on a project to archive photos along with tsunami-related information from Rikuzentakata and nearby towns. 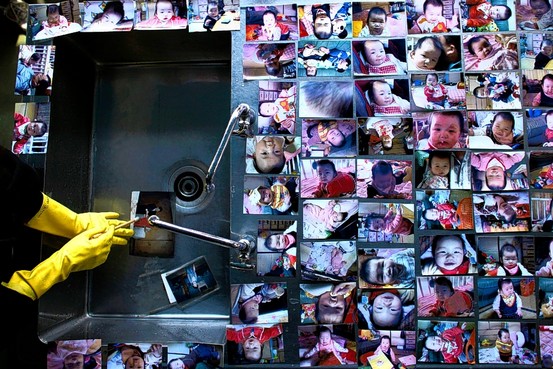