[a conservation conundrum: “wait, later this will be nothing”]

Erika Mosier, Paper Conservator at The Museum of Modern Art, presenting on behalf of co-authors Brenna Campbell (Andrew W. Mellon Fellow in Conservation, MoMA) and Scott Gerson (Associate Paper Conservator, MoMA), highlighted some of the conservation and exhibition challenges presented by Snow, a major book project by Swiss-German artist Dieter Roth. Snow is the centerpiece of the MoMA’s current exhibition [February 17 – June 24, 2013] “Wait, Later This Will Be Nothing: Editions by Dieter Roth.”

Snow represents a transitional moment in Roth’s career, a movement away from his earlier Constructivist works towards more experimental book forms and explorations of entropy and decay. The treatment and exhibition of Snow not only posed an array of physical and material challenges but also raised questions about the biases, values, and long term considerations of our work as conservators. These considerations, as well as attempts to balance a respect for the integrity of the object with the artist’s intent, were further complicated by the fact that this particular artist was especially interested in material decay and viewed museums as “funeral parlors.”

Roth was commissioned make an artist book in 1964; over the course of three months, he produced thousands of drawings, prints, and notes in preparation, tacking them to the walls of his studio. Though the book was never published as originally conceived, Roth compiled a few hundred of the notes and drawings into a cardboard album and titled it Snow. In the late 1960s he fabricated a table and chairs to house and display Snow; the book was exhibited open on the table with a selection of pages removed and hung on the wall. 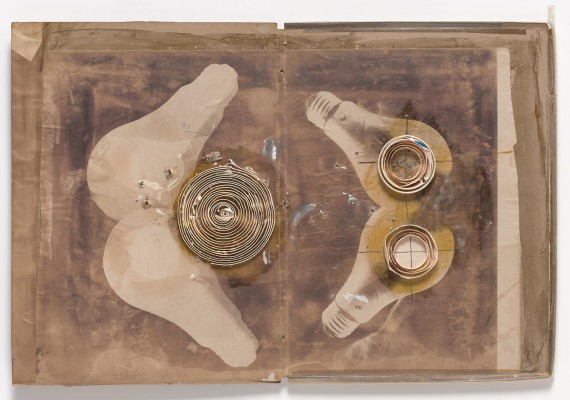 [Roth’s definition of a book: “a community of like-minded things”]

The mixed media nature of Snow posed a variety of conservation challenges. In addition to tracing papers, diazo types, printing proofs, plastic sleeves, and pressure sensitive tapes, the book includes a small wax still-life, paper cups, plastic tubing, and is housed in what is essentially a cardboard suitcase. Roth’s abundant use of pressure sensitive tape resulted in extensive damage, especially at the edges of the plastic sleeves where the deteriorating adhesive caused them to stick together. Sticky residue leaching from the PVC sleeves has made it difficult to remove items. A previous stabilization effort (initiated by Roth) involved adhering the tracing papers to cellulose acetate film, leading to structural and chemical damage.

Conservators also faced the challenge of attempting to determine the original order of the pages. Some elements appear to be missing and the conservators and curators had to guess at Roth’s original order, using clues such as evidence of stubs, lining up holes on the pages that were shot through with a BB gun, and comparing stains from failed adhesives.  Roth was making changes to Snow into the late 1960s. For example, neither the plastic sleeves nor the cellulose acetate sheets were present in the 1964 version of Snow; these were added later at Roth’s request in order to stabilize the pages for exhibition. Though the artist added these elements, curators determined that they were not part of his original concept for the piece and since they had already caused irreversible damage, it would be acceptable to remove them in the course of conservation treatment.

Treatment goals for Snow included stabilization for handling and display, identification of materials used, and treating individual components for imaging. Removing the acetate linings allowed the tracing paper pages to move and drape more naturally. Torn tracing paper was then repaired with a 1:1 Lascaux:water heat set tissue. Acetone and xylene were used to reduce the staining and stickiness of remaining adhesive residues, and a water/ethanol mix was used to reduce stickiness on the PVC sleeves. Failing pressure-sensitive tapes were either removed or re-attached with PVA.

Snow is now displayed open on the table with many more elements displayed on the walls. Digital images of all pages can be viewed on a display screen in the gallery.  In its current iteration, Snow does not function as a book but could technically be returned to book format if requested for use by a researcher.